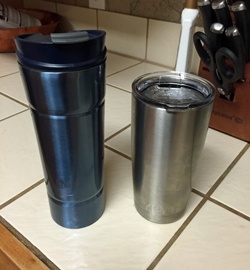 After purchasing a new Yeti 20 oz. Rambler I had to find out if it could beat my Bubba Hero Tumbler 20 oz. So I loaded them with ice and water, set them on the kitchen counter and waited.

At 27 hours, the Bubba showed its superiority with several small cubes of ice left while the Yeti was out of ice. The Bubba actually took another 2 hours before the ice melted. I think that’s a fair competition don’t you?

I like them both but now I know that the Bubba which is about half the price of the Yeti was the better purchase.