The Crystal Pig Hunt Club is owned and operated by partners Gary Cooper, owner, Southeast AgNet/AgNet West and brothers Chuck, owner, ZimmComm New Media and Paul Zimmerman, Roche Diagnostics. They’ve been hunting together for over 20 years and are primarily deer hunters although they’re quite willing to branch out into pheasant, turkey, hogs and whatever else they have time for. They are avid fishermen too who love to fight big Reds in the Gulf of Mexico as well as snapper, grouper and whatever else bites on a hook.

Hunting with the trio are Paul’s sons Eli, Luke and for his first hunt ever (2013), Joe. Learn a little about us below.

This is your webmaster, Chuck Zimmerman. In my spare time I actually get to hunt and fish some. I’m known on Twitter as the @AgriBlogger which is my personal and professional ID. My wife Cindy and I own ZimmComm New Media and have recently settled back in our home state of Florida, out in the panhandle just north of Pensacola.

My background is primarily in agricultural media with stints managing farm radio networks until we found out what we could do with the internet and social media. My primary online location is AgWired.com, although ZimmComm is also involved in many more websites and project with great companies like New Holland. 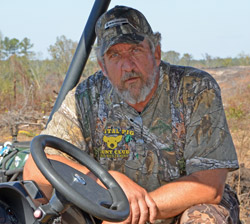 This shaggy lad is Gary Cooper. Gary and I were once partners in business in Florida and have stayed in touch even after Cindy and I moved to Missouri back in 1991. Gary is the founder and owner of AgNet Media which operates several businesses including Southeast AgNet and AgNet West radio networks, Citrus Industry magazine, Florida Citrus Expo and Florida Pest Pro magazine.

When Gary is not working you can mainly find him off the Gulf coast of Florida above Steinhatchee in his boat chasing trout and reds. That’s of course when it is not deer season!

Read Gary’s full bio here which includes the story about how our camp became named the Crystal Pig. 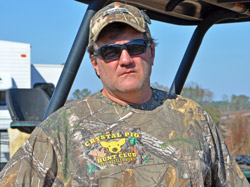 Here’s my little baby brother Paul Zimmerman. Paul not only works for Roche Diagnostics but oversees the Walking Z’s ranch with his wife Laura in Georgia. Paul found this awesome property that now bears the camp name after searching and looking for more hours than he can remember. Of course there are some hunt club activities we all have trouble remembering but that’s another story best not told in public.

Paul has six children including three boys you’re about to meet below. He’s got his hands full so to speak. These boys are baseball players and Paul has even helped coach them at times. 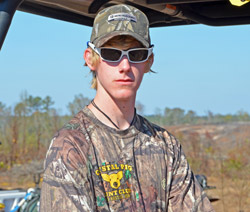 This deer slayer is Eli Zimmerman or Yi Yi as we like to call him. He is a tall slender drink of water. That comes in handy behind the plate when he’s playing catcher. It’s kind of hard to throw past him if you know what I mean.

Eli earned the title deer slayer because he kills a lot of deer. Plain and simple. He goes out, he kills deer, he comes back to camp and then it’s game on for deer cleaning. 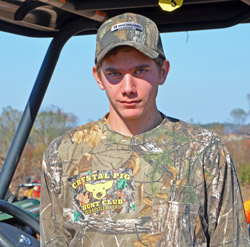 Now we get to the Duke. This is Luke Zimmerman and my Godson. Luke’s claim to deer hunting fame comes from his first hunt with us in Missouri when he killed a trophy buck. He made us all proud. Here’s his story about it:

One afternoon in Pilot Grove Missouri, after lunch me, my brother and Dad went back out in the woods. They dropped me off at my ground blind and were walking to my brother’s stand. I was looking around and all of sudden I see this big 11-point buck looking right at my Dad and brother. I aimed and shot my .35 rifle, hit him in the spine but he was still moving around. So as fast as I could get my 8 year old self to do it, I unloaded my gun at that buck but missed every time besides my first shot. He finally fell and I had my first deer. Hunting’s a huge part of my family. Getting to spend time with them, doing something we all love helps bring us together.

Like his brother Eli, Luke is a baseball fanatic. When he’s not hunting he’s most likely playing or practicing somewhere. He’s got 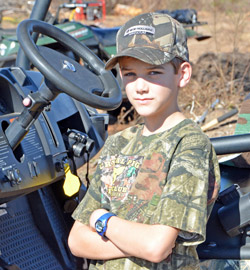 Last but not least we’ve got Joe “Joey Joe” Zimmerman. This monster got on his first hunt last fall and is still looking for his first buck. It’s coming Joe. Hang in there.

Joe is following in his brother’s footsteps and has just started playing baseball.

Feel free to contact Chuck if you’ve got any questions: chuck@zimmcomm.biz