I became a James Wesley fan when he sang “Thank a Farmer.” Now he’s got a song about saltwater fishing so he’s adding to the list of songs I like – Hooked Up. This came to my attention via Keep America Fishing:

Country music star James Wesley has a new song and it celebrates the thrill of the catch – and the big one that got away! “Hooked Up” tells the story of fishermen chasing a blue marlin at the Big Rock, a legendary fishing spot off the coast of Morehead City, NC.

Wesley is no stranger to fishing. “When I’m not busy touring, I enjoy being outdoors and spending time fishing with my family,” he said. “I’ve never actually landed a blue marlin at the Big Rock, but it is a long-time dream of mine.”

But this song will do more than get you in the mood to get out on the water – it helps you give back to the resource.

Wesley and his partners at Calcutta are donating a portion of proceeds from every iTunes download of “Hooked Up” to KeepAmericaFishing and the Big Rock Blue Marlin Tournament Charities. Just by listening, you’re helping to unite American anglers under one voice and protect our right to fish. 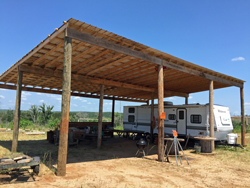 It is a satisfying feeling to complete the roof of a barn. That’s what we did this weekend at The Pig.

Paul, Gary, Luke, Eli and Joe were on location and got it done and it looks good. We organized our RV and have started some little barn projects to finish as time goes along.

Now we’re going to focus more on hunting. For now that means planning our food plot work for end of summer. We’ve been conferring with the guys at Tekomate about that and they’ve offered great advice. The little pine trees are making good progress so those plots will become increasingly important as time goes on.

Paul brought out a wild hog shoulder which we smoked all day Saturday. You want to talk about some good eating? It was tasty and tender. There’s nothing like some good pig at The Pig!

I’ve got a new photo album started for this year’s work days. We’ll be adding to it after each visit: 2015 Crystal Pig Hunt Club Photos

It’s salt water fishing season in the Gulf of Mexico!

I took Paul and his daughter, Mary, and her boyfriend Gatlin out on a trip to catch king and spanish mackerel. We did good on the spanish with almost 4 limits. We lost two large kings though. They were biting early before turning off.

We mainly fished over a wrecked ship only a mile or so from the mouth of Pensacola Bay. These fish were schooling and we fished them with artificial lures on light tackle. Talk about fun.

Mackerel is an excellent and really healthy fish to eat. I smoked some and made some awesome dip using: cream cheese, chopped leeks and green onions, pepper, worcestershire sauce and lemon juice. As Gary would say, Dayumm Good.

May 23 opens red snapper season in Gulf state waters with a new 70 day season. Can’t wait to get out on top of them.

Next week the whole club team will be at the Pig for work days in preparation of hunting this year. See you from there next.