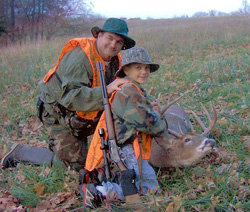 Here’s one of my favorite photos from the archives. This is Luke’s first deer, first buck and it was a monster!

On Luke’s first hunt back in 2005 on opening day Paul walked him to the ground blind we had set up for him. He started walking to his stand and had not gone far when he heard the first shot. The one that took down this buck. He turned back toward the stand and saw the buck doing a wild dance as Luke proceeded to sling some more lead in his general direction. None of them hit. The first one was all that was needed.

When asked later, “Son, do you know what you’ve done?” Luke said something like, “I dunno.” Well what he had done was kill one of the biggest bucks and biggest racks in all our years of hunting up to that date!