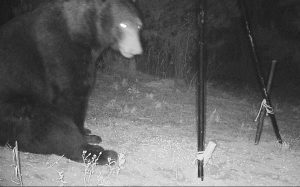 Here’s something you really don’t want to see on your “deer” trail cam. This very large black bear has demolished two of our feeders.

At first look when I saw the photo I thought, “I’d really hate to run in to him accidentally.” So I did a little research and it is actually very rare to have an encounter. I’m fine with that. I also found that there are areas in Georgia that have either no bear season or only one day. In our area they used to be pretty scarce but I’ve spoken with a number of farmers who say they’ve been seeing many more the last couple years. That’s also true of panhandle Florida where I live.

Although I’d rather not have a face to face meeting with a feral hog, those we can shoot anytime, year round. I’m hoping to have that chance soon. As well as a shot at a big buck before the season ends in January.