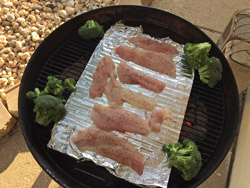 This is a follow-up to my last post on fall Gulf fishing. In this photo you’ll see my grill last night.

On it are filets from my mingo snapper along with some broccoli (grilled broccoli is the best way to eat it IMO). This light and flaky fish is about as good as it gets. We also had boiled corn and brown rice to go with it. 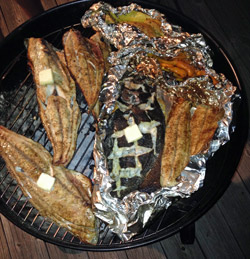 Now let’s contract that with Gary’s grill from last night. Gary had left Pensacola to go fish with his cousin down the Gulf coast from Tallahassee a ways.

On their trip on the flats they had a good afternoon. So on the grill you’ll see some of their sea trout, spanish mackerel, a whole flounder and one of my favorites, redfish on the half shell.

Along with that he added roasted peppers and squash.

Sometimes you have a good day on the water and some days not so good. But as long as there’s fish on the grill it turns out just right!