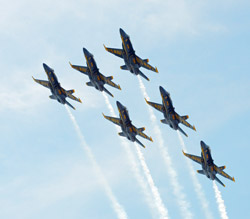 This has nothing to do with hunting unless you think of what a naval fighter pilot might have to do in a live action fight. But I’m doing a post with one of my pictures from the recent Navy Blue Angels airshow at Pensacola Beach because the Crystal Pig Hunt Club and its members love our country. Seeing these Americans in action is awe inspiring and great for patriotic morale.

Last year the Blue Angels were grounded because of the idiotic Congressional sequester BS. This year they are back and performed to a record crowd in Pensacola. It is a very expensive show to conduct but I would much rather see that money spent than so much more of my tax dollars that are being wasted every day on meaningless and misguided programs. How about you? Have you had the chance to see the Blue Angels in action. You can see their schedule here.

Here’s a link to more photos I took from the show.