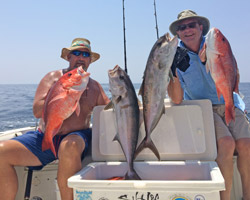 It’s time to hunt some red snapper in Florida. And that’s just what Gary and I did over the Memorial Day weekend. We started out on Sunday, the second day of the Florida red snapper season with Captain Travis on the Bamboo Vic II. I was wearing my Google Glass to capture some footage of our trip.

After starting out catching some live bait we went about 8 miles offshore to a few different spots. At our first stop, Gary caught a huge snapper. That broke the tension and from there we proceeded to get three limits: Red Snapper, Amberjack and Mingo Snapper. I also added a big Triggerfish to the cooler.

Although we had great live bait we caught most of the snapper on dead bait. In fact, at our last stop we chummed up some big ones and could actually see the fish take our bait and hooks. I’ve never seen anything like it. That stop also yielded some nice Amberjack like the ones you see in the photo.

Then on Monday we did a walk on with the Entertainer from the same dock and caught a big mess of Mingo snapper. Let’s just say it was two of the best days fishing we’ve had out on the Gulf. The weather has finally settled down and the water was as smooth as I can remember seeing it.

So, if you have a few minutes take a look at the video and see what you were missing.